New FCC Commissioner Talks About the Need for the FM Chip

The FCC is appealing to smartphone-makers to activate the FM receiver chips that come standard in most U.S. devices, but which remain turned off in more than half. Newly appointed chairman Ajit Pai told audiences at last week’s North American Broadcasters’ Association symposium in Washington DC (17/2/2017) the untapped technology offers a host of benefits to consumers and content-producers alike. 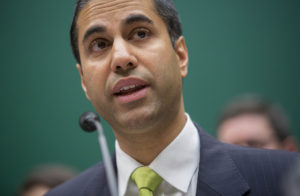 This is what he said ” That brings me to the issue of FM chips in smartphones. Simply put, the world is going wireless. And if you’re in the content business, you need to be exploring every way possible to make your content available on people’s smartphones. I know my remarks are being followed by an hour-long panel on the benefits of FM chips in smartphones, so I won’t spend too much time on this topic, but allow me to offer some high-level thoughts. As you know, the vast majority of smartphones sold in the United States do, in fact, contain FM chips. The problem is that most of them aren’t activated. As of last fall, only about 44% of the topselling smartphones in the United States have activated FM chips, and the percentage is lower in Canada. By comparison, in Mexico that number is about 80%. So it’s not just that the United States and Canada could be doing better. We could be doing a lot better. It seems odd that every day we hear about a new smartphone app that lets you do something innovative, yet these modern-day mobile miracles don’t enable a key function offered by a 1982 Sony Walkman. You could make a case for activating chips on public safety grounds alone. The former head of our Federal Emergency Management Administration has spoken out in support of this proposal. The FCC has an expert advisory panel on public safety issues that has also advocated enabling FM radio chips on smartphones. It pointed out that, “[h]aving access to terrestrial FM radio broadcasts, as opposed to streaming audio services, may enable smartphone users to receive broadcast-based EAS alerts and other vital information in emergency situations—particularly when the wireless network is down or overloaded.” Moreover, most consumers would love to access some of their favorite content over-the-air, while using one-sixth of the battery life and less data. As more and more Americans use activated FM chips in their smartphones, consumer demand for smartphones with activated FM chips should continue to increase. I’ll keep speaking out about the benefits of activating FM chips. Having said that, as a believer in free markets and the rule of law, I cannot support a government mandate requiring activation of these chips. I don’t believe the FCC has the power to issue a mandate like that, and more generally I believe it’s best to sort this issue out in the marketplace. For despite the low numbers, we are seeing progress; in the last two years, the percentage of top-selling smartphones in the United States that have activated FM chips has risen from less than 25% to 44%.”

Wouldn’t it be great if our regulators stepped up and also pushed for the same thing!

You can read his full speech here.